A LINK TO A WEALTH OF INFORMATION

NYC C.L.A.S.H. was founded in July, 2000.
You can contact us at nycclash@nycclash.com

This organization was established to meet the needs of New York City and New York State residents in order to keep them informed about smoking issues particular to New York and to address the needs and concerns of New York residents who choose to smoke.

The smoking debate entails enormous amounts of studies, research and articles on the subject.  There are smokers' rights groups around the world active in fighting for our freedom to choose.   They have been in existence much longer than NYC C.L.A.S.H. and have amassed an extraordinarly large amount of information and reviews to combat the lies, exaggerations and manipulation which the anti-smoking groups and scientists have thrown into the public arena.

NYC C.L.A.S.H. provides you with complete details regarding our situation right here in New York   We also do our best to provide you with a sampling of the different facets that the smoking debate entails.  This is where our participation concludes as it would be impossible (and uncalled for) to duplicate the excellent work already completed and in continuous motion by the smokers' rights groups that have preceded us.  It is with allegiance that we now direct you to the most widely respected...... 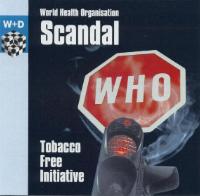 FORCES International, in co-operation with FORCES Netherlands and with W + D Wissenschaft, a research organisation located in Berlin, Germany, announces the publication of an extensive research undertaking concerning the ethics of the World Health Organisation's project 'Tobacco Free Initiative' (TFI). The TFI is the WHO's instrument to push for a "Framework Convention on Tobacco Control" (FCTC).

Click here for introduction, summation, and sample viewing of the contents of this incredible CD!


This study reveals that:

The WHO manipulated submissions for "public hearings" on FCTC held in Geneva in October 2000 to create the impression that the response to their call for a FCTC was "overwhelming," while in reality the majority of the member nations did not even respond;

The WHO issued misleading statements in its brochure ("Leave the Pack Behind") created for 1999 World No-Tobacco Day. The brochure was nothing but a PR promotion paper for Nicotine Replacement Therapy;

The WHO projections concerning 'Smoking Related Deaths' are not based on specific research, and are even in contradiction with the WHO's own official data concerning mortality and morbidity;

About eighty percent of the WHO's budget does not come from the contribution of member nations, but from "other sources" or "casual income contributions" such as, for example, pharmaceutical multinationals such as Glaxo and Pharmacia, which manufacture nicotine replacement products. While the WHO accuses those who dare to differ with its political agenda of being funded by the tobacco industry, this supposedly neutral and unbiased international body receives massive corporate funding from entities that have a vested interest in its activities.For a sample of the contents of the CD, we connect to FORCES Netherlands.


This formidable CD, containing over 10,000 documents, is a must-read for journalists, politicians, scholars and laypeople. Click here to order. FORCES International also invites its readers to visit its section WHO: Yet Another Fight Againt The Pandemic of Corruption, and wishes to thank W + D Wissenschaft, as well as FORCES Netherlands for the cooperation and hard work that has made possible the presentation in time for World No-Tobacco Day - a day instituted to celebrate the largest fraud ever perpetrated on humanity.

Excerpt:  "Dietrich publicly and repeatedly complained that WHO was a bureaucracy for bureaucracys sake, mired in useless statement-making and conference-giving. He thought it focused too much on First World concerns -- such as seatbelt campaigns and smoking -- and not enough on the developing worlds sick and poor."

[Notable Opinion about the Pharmaceutical Companies:  Big Lies From Big Pharmaceuticals: Americans Can't Handle The Truth - "I´ve come to the conclusion that Americans simply don´t want to know the truth.  This problem is compounded by the fact that the unthinking public is more than willing to take the word of so-called "experts" at face value with little or no interest in
examining the facts."]

WHO IS QUICKLY MAKING MORE ENEMIES WITH THEIR SCANDALOUS SELF- SERVING MANIPULATION OF THE ISSUE:

The International Tobacco Growers Association (ITGA) has reacted angrily
to claims by the World Health Organisation (WHO) in a recent report that it is
a front organisation for tobacco companies.

More Media Releases by ITGA, including more confrontations and attacks against WHO actions.