We can expose the lie and take back control with :

BUT WE NEED YOUR HELP

The anti-smoking crusaders have

IF EVERY SMOKER IN THE U.S. GAVE

SO WE'RE ASKING FOR

NON-SMOKERS WHO UNDERSTAND THE THREAT THE ANTI-SMOKING CRUSADE POSES TO FREE WILL IN GENERAL CAN MAKE THIS ENDEAVOR AN EVEN GREATER SUCCESS BY DONATING ALSO.
The same man who masterminded the lawsuit against the tobacco companies is about to launch the same attack against fast food.  Soon restaurants will be told what they can serve and you won't be allowed to eat what you want, or if you can, your food choice will be taxed unmercifully and you'll be told where you won't be allowed to eat it
(heavens to betsy you should be a bad role model by eating cheese fries in front of "the children").

(Please Note:  Donations are NOT tax deductable.
NYC C.L.A.S.H. is a corporation, not a tax exempt charity.)


T-SHIRTS CAN BE PURCHASED FOR $17 (including shipping). 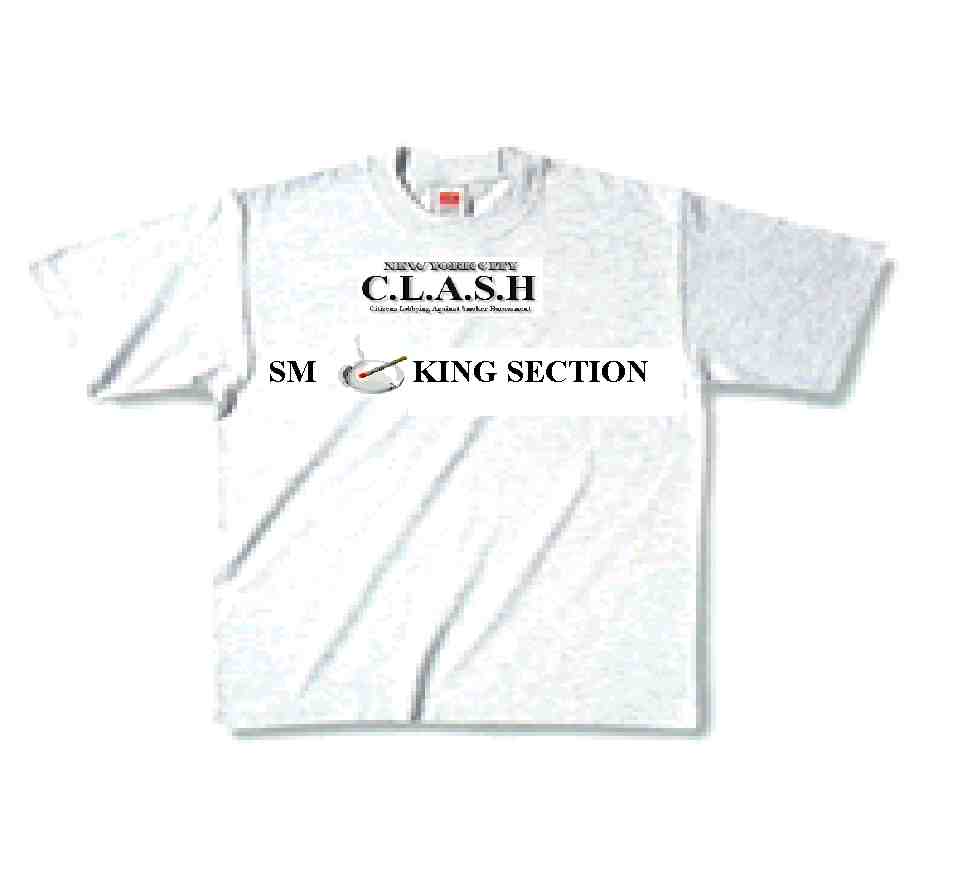 T-Shirts come only in white with black lettering.
Sizes are  M - L - XL


It's the perfect message to show the anti-smokers that you will not be intimidated.
No amount of harassment will stop you from enjoying your cigarette.

Noted author Taylor Caldwell originally wrote this article for a magazine in 1967.  Her words are dead on:

"There are those in this world whose 'love' is not only a wicked lie, but is a cover for unpardonable vindictiveness, a secret desire to cause pain, a sadism.  There are those who are not to be trusted for a single moment, for they are innately malignant as well as hypocritical.  They are the "whited sepulchre" of whom Our Lord spoke with such anger and scorn.  Give in to them for a moment, doubt that they are entirely evil, tolerantly admit they might be right in one thing -- and they will fall upon you, believing your defenses are down and you have surrendered yourself as a victim.  They love victims."

'love'  = the anti smokers' claim that they "care" about others' health in their crusade to end smoking.

desire to cause pain, a sadism = smoking bans that delight them most when they see smokers standing out in the rain.

Give in to them for a moment,...  and they will fall upon you = Compromise leads to greater restrictions (smoking sections to no smoking indoors, or now even outdoors!, at all).

Q1.  How has the anti-smoking cartel gotten so far?

Q2.  What is the ultimate goal of the anti-smoking crusade?

A.  A Smoke-Free Society

Q3.  How do they intend to win their smoke-free society?

The anti-smoking crusaders' success began when they discovered that appealing to smokers to quit wasn't working.  So instead they hit upon the idea to scare non-smokers into believing that smokers were harming them with their smoke and coined the phrases "Environmental Tobacco Smoke" (ETS) and "Secondhand Smoke" (SHS).  They are one and the same.

Not only did this work to create fear among non-smokers but that, in turn, created a sense of guilt among some smokers either self-induced or provoked by non-smokers.

They accomplished this by conjuring up studies that concluded ETS caused cancer, heart disease and a myriad of other ailments in previously healthy non-smokers.  One of several anti-smoking operatives, James Repace, held a position in the U.S. Environmental Protection Agency (EPA) let open the floodgates of the anti-smoking movement with his involvement that led to the 1993 EPA Report "Respiratory Health Effects of Passive Smoking: Lung Cancer and Other Disorders."

In 1998 large sections of this report were invalidated and then vacated [view decision] by Federal Court Judge William Osteen, previously known to be anti-tobacco in his rulings.  Judge Osteen sat with scientists for four years going over the EPA's study and he determined:


In this case the EPA publicly committed to a conclusion before research had begun; excluded industry by
violating the [Radon] Acts procedural requirements; adjusted established procedure and scientific norms to
validate the Agencys public conclusion, and aggressively utilized the Acts authority to disseminate findings
to establish a de facto regulatory scheme intended to restrict Plaintiffs, products and to influence public
opinion. (emphasis added).

The Congressional Research Service (CRS), an arm of Congress, independently arrived at the same conclusions.
The U.S. Senate Republican Policy Committee summed up the CRS's investigation into the EPA report:


"In response to requests by Congress to review the literature associated with secondhand smoke, the
Congressional Research Service (CRS) in testimony before the Senate concluded that the 'statistical evidence
does not appear to support a conclusion that there are substantial health effects of passive smoking.'And, CRS in a written report for Congress found that 'even at the greatest (exposure) levels, the measured risks are still subject to uncertainty'["CRS Report for Congress: Environmental Tobacco Smoke and Lung Cancer Risk," 11/14/95]."

There are NO studies to date on ETS that conclusively link your cigarette smoke with more than some irritation to others.  That is NOT enough reason to condemn a group of people engaging in a legal behavior, using a legal product, to the discrimination, stigmatization, social engineering and persecution that has been heaped upon them  by the anti-smokers.

From the large health agencies (American Lung Association, American Cancer Society, American Heart Association) to the smallest of anti-smoking groups formed throughout the country they have been rewarded with substantial amounts of money in order to continue on with the propaganda that they hope will one day win them their smoke-free society.

They either receive grants from interested parties such as the Robert Wood Johnson Foundation (the ones who benefit from smokers looking to use their patch to quit) or other pharmaceutical companies or have been handed the proceeds of the Master Settlement Agreement in which the tobacco companies agreed to pay the states a total of $246 billion for their "misdeeds."  The problem with the latter is that it is NOT the tobacco companies who pay but their customers who pay this money through price increases. It was written to be that way in the Agreement itself.  It is a hidden tax.

The ETS lies, fueled by a bottomless well of money to pay for advertisements that appeal to the public, ads that push smoking bans, lobbyists and all that is necessary (membership drives, organized mail campaigns and phonebanks) to attract the 2% of the population that are ANTI-SMOKERS (a different animal from non-smokers), have led to the casting out of smokers based on propaganda, hysterical exaggeration and outright lies.

Politicians, hearing only one side of the issue, have easily gone along and enacted smoking bans.  They are either willing participants or simply conned.  Whichever response applies it is because those in the smokers' rights arena have no money with which to combat the ads or lobbyists.  We have no money that would help to show that the large majority of nonsmokers DO NOT think there should be no place left for smokers.  We have no money that would allow us to be recognized as a formidable group of voters that are just as deserving of representation as everyone else. We have no money to publicly expose the ETS lie that has led to our eviction from society.