> DON'T EAT OR DRINK WHERE YOU CAN'T SMOKE 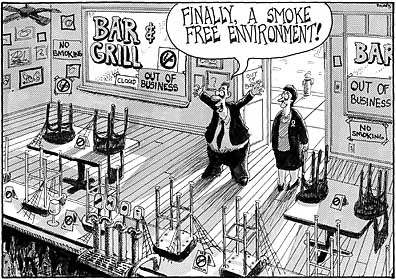 Is it that you don't mind or is it that you simply accept things as they are?  Do you think that little of yourself?

It's bad enough that Andrea Peyser, columnist for the NY Post, thinks smokers "are alone among the degenerates of society" that you belong in alleys.   She thinks you are "far, far worse" than junkies or alcoholics or prostitutes.  But then you feed this kind of hate by sheepishly going outside to have a cigarette. Read this and then answer the question from us that follows:


CANCER STICKING IT TO WHINING NICO-FIENDS
By ANDREA PEYSER

Message to cigarette junkies: You've lost. Get over yourselves. You can't kill us now.

It was brunchtime on Day 1 of nonsmokers' liberation at the trendy, Frenchified cafes lining Brooklyn's Smith Street - for too long the stronghold of those who foisted their disgusting vice on innocent lungs.

For the first time since Sir Walter Raleigh thought it would be a goof to stick a carcinogen in his mouth and light the thing on fire, smokers were banished from bars to the street corners and alleys where they belong, to indulge their pathetic habit with like-minded losers.

"I'm freezing my ass off," complained Rich Kim, as he braved an icy drizzle to enjoy the pleasure of a Marlboro, outside the ironically named Cafe Bar Tabac.

"This is why I go home today," cracked an unamused Uschi Vogl, puffing away on the street with fellow future cancer victims. Vogl was visiting from Munich when the ban went into effect. Bye-bye, Uschi. Enjoy the freedom of Germany.

Despite all the moaning from smokers that the ban will hurt business, the restaurant was buzzing.

Manager Olivier LaPlaud said he was forced to stop a steady stream of clueless puffers from lighting up Gauloises at the bar as they arrived.

The ugly truth is that smokers are not anything like junkies or alcoholics or prostitutes or anyone else who feels powerless over a hideous addiction. They are far, far worse.

Smokers are alone among the degenerates of society in that they share their poison with everyone within breathing vicinity.

I can choose not to shoot heroin. But when I'm downwind of a smoker, I'm his bitch. My clothes stink. My hair smells. My dry cleaner is the only one who profits from the transaction.

Before, I wondered if the ban was a good idea. Now, I only fear it doesn't go far enough.

Mayor Bloomberg ought to fine moronic dads who smoke in playgrounds at least $10,000 a kid.

At the Heights Cafe in Brooklyn Heights, the new smoking laws were actually saving marriages.

Ted and Dora Kyrezis share a Bay Ridge house with brother-in-law Joe Montalto and his wife, Joanne. The guys smoke; the girls don't.

As soon as the ban went into effect, Joe quit. Again.

Outside, Joe lit up one of Ted's American Spirits.

"I quit for six whole hours," he shrugged.

At least the rest of us got to breathe for that time.

QUESTION:
WHY WOULD YOU LET ANYONE TREAT YOU LIKE THIS?

OUR REPRESENTATIVES OF FREEDOM IN IRAQ -- OUR HEROIC SOLDIERS -- ARE ASKING FOR MORE CIGARETTES.

SHOULD ANY ONE OF THEM FEEL ASHAMED FOR BEING A SMOKER?
WELL, NEITHER SHOULD YOU.

AND DON'T LET ANYONE MAKE THE CHOICE OF WHETHER TO SMOKE
OR NOT TO SMOKE FOR YOU.

REFUSE TO BE TREATED SO BADLY.  DON'T SIMPLY GO OUTSIDE.
DON'T GO OUT AT ALL TO ANY PLACE YOU CAN'T ENJOY A CIGARETTE INSIDE.

STICK WITH IT FOR A MONTH OR TWO AND MAKE THE LAWMAKERS CRY UNCLE! 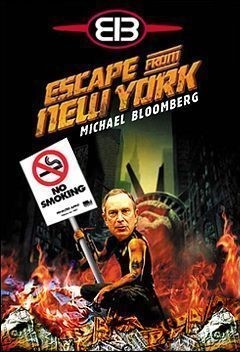 PLEASE PRINT AND HAND OUT THE FOLLOWING ADS TO EVERYONE YOU KNOW OR MEET.


HEY SMOKERS --
WHAT DOES IT TAKE TO LIGHT A FIRE
UNDER YOUR BUTTS?

How many places are you willing to be kicked out of
before you fight back?

Stand up for yourself.  Now.
It's easy.  Put your foot down.
Then put the other foot in front of it.
And walk.  Away.  From any restaurant or bar
where you can't smoke.

THE WORD IS BOYCOTT

It's worked in other towns
where the smoke bans have been reversed.
Time to do it here.  After all, we're New York.
(Did they think we were San Francisco?)

Stop giving in.
Start taking out.


Okay, smokers.  It's time to draw the line.
As far as the Mayor and the council are concerned,
your rights don't matter.  But your money still does.
You're 30% of the city's population,
so whether this smoke-ban sticks is up to you.


Show em you mean business
by giving em no business


(Luckily, you live in a town with great take-out and
a liquor store on the corner, so it shouldn't be hard to do.)

BOYCOTTS BREAK BANS
You don't have to smoke to believe in civil liberties and private property rights
or think government's too intrusive.  We urge our non-smoking friends to join us in our stand.